Disneyland park has been innovating for 61 years – ever since it opened on July 17, 1955. In fact, the park itself was an innovation, and continued to lead the way in creating immersive experiences in the years to follow. Let’s look at four amazing innovations that have come out of Walt Disney’s original Magic Kingdom.

1. First theme park – Disneyland was the world’s very first theme park. At the time, amusement parks were dirty and unsafe, leading Walt’s wife, Lillian, to ask him why he’d want to build one. His now-famous response: “Mine wouldn’t be.”

Walt Disney pioneered the idea of a theme park as family entertainment for the entire family. He envisioned a place where children and their parents could have fun together – an idea that quickly spread throughout the world and revolutionized family travel. Disneyland is considered the first truly immersive, themed 3D storytelling experience, influencing concepts for modern-day experiences like resorts and interactive museum exhibits.

2. First daily operating monorail in the Western Hemisphere – When the Disneyland Monorail opened in 1959, no other monorail operated daily on this side of the planet. This futuristic concept of transportation immediately captured guests’ imaginations and is still a favorite today.

3. First tubular steel roller coaster – The Matterhorn Bobsleds may be a nostalgic treat today, but when it opened in 1959, it was the first of its kind. The first to employ a tubular steel track, this innovative attraction set the standard for modern-day roller-coaster design. 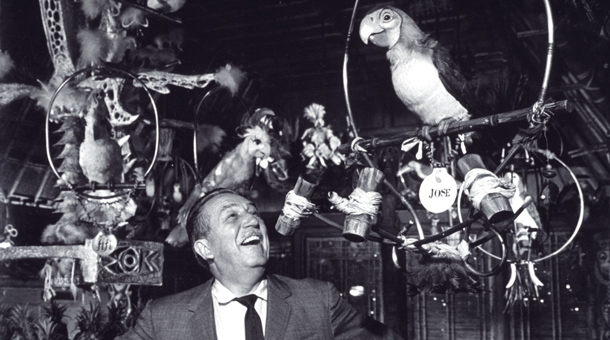 4. First use of Audio-Animatronics technology – The now-ubiquitous Audio-Animatronics figures that are both synonymous with Disney Parks and also imitated around the world were first seen in “Walt Disney’s Enchanted Tiki Room” in Adventureland at Disneyland park. The technology has grown and evolved through the years, and it keeps amazing guests at Disney Parks around the world.