In the whimsical Fantasyland at Disneyland park, just beyond the drawbridge of Sleeping Beauty Castle, is a magical storybook village. Located within a 19th century stone and brick manor called Toad Hall is the home of the beloved attraction, Mr. Toad’s Wild Ride.

Along with many Disney Parks attractions that have been inspired by feature films, this attraction is based upon “The Wind in the Willows” segment of “The Adventures of Ichabod and Mr. Toad.” This charming sequence of the film depicts J. Thaddeus Toad’s mania for motorcars and all of the trouble his vehicle gets him into. The 1949 Disney animated film directly inspired the creation of Mr. Toad’s Wild Ride, a July 17, 1955, opening-day attraction. In 1983, the attraction was reimagined, with its original “fantasy fair” facade making way for its current traditionally British entrance, along with detailed scenes, settings and special effects that further bring the story to life. 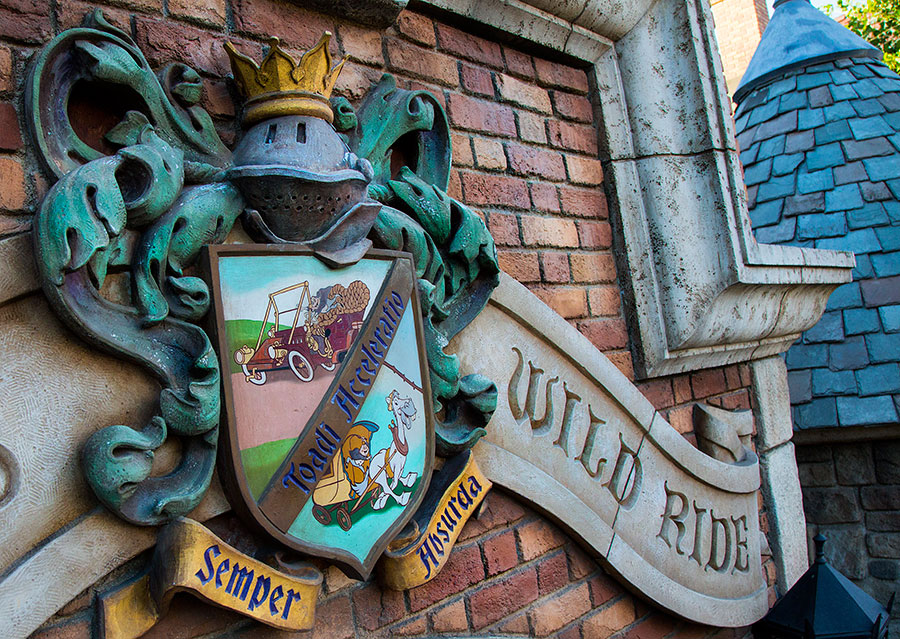 After entering Toad Hall from an outside garden below Toad’s family crest with the motto, “Toadi Acceleratio Semper Absurda” – translated to, “A Speeding Toad is Always Absurd” – you board a 20th-century-inspired, two-person motorcar to “nowhere in particular.” Toad takes you on a very wild ride indeed, through 15 scenes, including a library, a tavern, a wharf with a view of London’s famous Tower Bridge, Winky’s pub, a courtroom and ultimately the ominous inferno scene, all while the film’s song, “Merrily on Our Way,” fills your ears.

Mr. Toad’s Wild Ride is just one of many treasured “dark rides,” characteristic of show sets painted with black-light paint and illuminated in ultraviolet light, which immerse you in the stories of your favorite movies.