Tucked upstairs in the France pavilion is an exquisite little gem – an elegant-yet-relaxed dining room with classic French décor and vintage photos on the walls, French waiters in crisp white shirts and long bistro aprons, a menu of sublime French dishes and wines that rivals the finest restaurants.

The name Monsieur Paul pays homage to Chef Paul Bocuse, one of the three French chefs who opened Les Chefs de France at Epcot in 1982. Bocuse was named Chef of the Century in 2011 by the Culinary Institute of America, and received three Michelin stars for 50 straight years at his famous Lyon, France, restaurant, Auberge du Pont de Collonges. Today his son Jerome Bocuse operates the French restaurants at Epcot and renamed the upstairs to honor his father’s extraordinary culinary achievements. 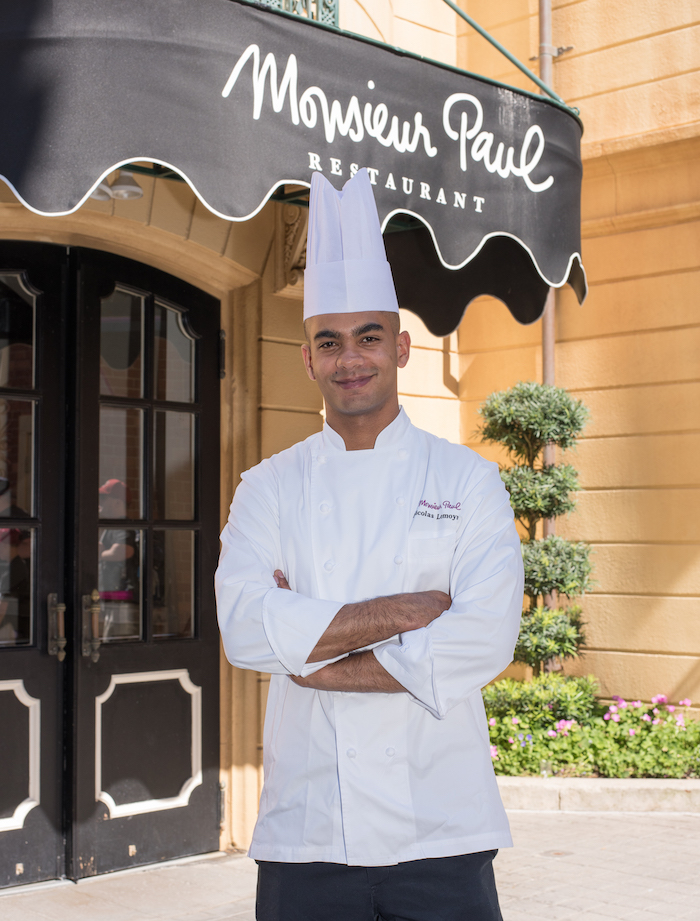 A new chef is now at the helm – Nicolas Lemoyne, who, at age 27, has worked in some of the top restaurants in the world, including Chef Bocuse’s restaurant in Lyon.

1. What first brought you to America?
After working in Lyon, I headed to Indonesia at age 23, and after three years, I went back to France where I met Jerome Bocuse, who introduced me to Chef Daniel Boulud. I went to work at his restaurant Daniel in New York City [a restaurant with two Michelin stars.]

2. And from New York to Monsieur Paul?
Yes, Jerome Bocuse asked me to come back, as we’re serving dishes similar to what we serve at the restaurant in Lyon at Monsieur Paul. And for me, it’s a great fit. I was trained in all the classic dishes at L’Auberge.

3. What have you changed on the Monsieur Paul menu?
I love to cook and eat traditional food. But I like to see it in a modern, lighter way, and I’ve changed more than half of the menu. You will still find escargot, but now it’s served with parsley coulis, garlic cream, chips of dried garlic and black pepper croutons. The tuna Niçoise showcases beautiful fresh tuna with a boiled quail egg, paper-thin slices of toasted bread and small bites of tapenade, tomato confit, black olives and anchovies. Elevating a classic with a pretty presentation.

4. Does every meal still start with those amazing French breads?
Yes! We bake special breads just for Monsieur Paul every single day, and while our bakers start at 4 a.m., the bread for this restaurant is the last thing made each day – cheese and poppy seed rolls and miniature baguettes, served with French butter. And our desserts also are made daily in the Boulangerie Patisserie in the back of the pavilion.

5. What’s the biggest wow for guests?
We do a Maine lobster appetizer with the claw wrapped in shredded phyllo dough and fried – it’s like a crunchy little tower on the plate, served with lime sweet peas, white asparagus, porcini mushrooms and lobster veloute. Again, familiar ingredients elevated to something special.

6. And a dish that might surprise diners?
The chicken. We serve the breast and leg, seared with crunchy skin and tender meat with Brussels sprouts, bacon, black truffle and crispy sunchoke chips. It’s hearty, rustic and satisfying.

7. What dishes remain on the menu?
We had to keep the red snapper in potato “scales” as that is a Bocuse original, served with fresh spinach and rosemary sauce. And the grilled beef tenderloin with mushroom crust and Bordelaise sauce is still one of the most popular dishes. The carrot soup with fresh goat cheese raviolis stays, as does the famous Soupe aux truffes V.G.E., a soup of black winter truffles covered in puff pastry that Chef Bocuse invented in 1975 to serve the president of France.

8. The sauces make each dish. What’s the secret?
We make every sauce from scratch, starting with meat bones or fish bones. To French cuisine, the sauce is everything. A big part of my job is to teach the new cooks how to make a perfect sauce. All of our cooks come from France for a one-year training program. I think it’s very important to keep this tradition alive.

9. Any changes to beverages?
We have an extensive wine list and now serve more wines by the glass – 23 plus two Champagnes. We serve classic cocktails, such as martinis, Scotch and gimlets. And we recently introduced café gourmand, an espresso or cappuccino with three sweet bites, the perfect way to end your dinner!