Are you ready to party? You might think I’m saying it because the summer season is right around the corner, but in fact, it’s time for all of us to start thinking about Disney Pin Celebration 2016, themed to … Pixar Party! 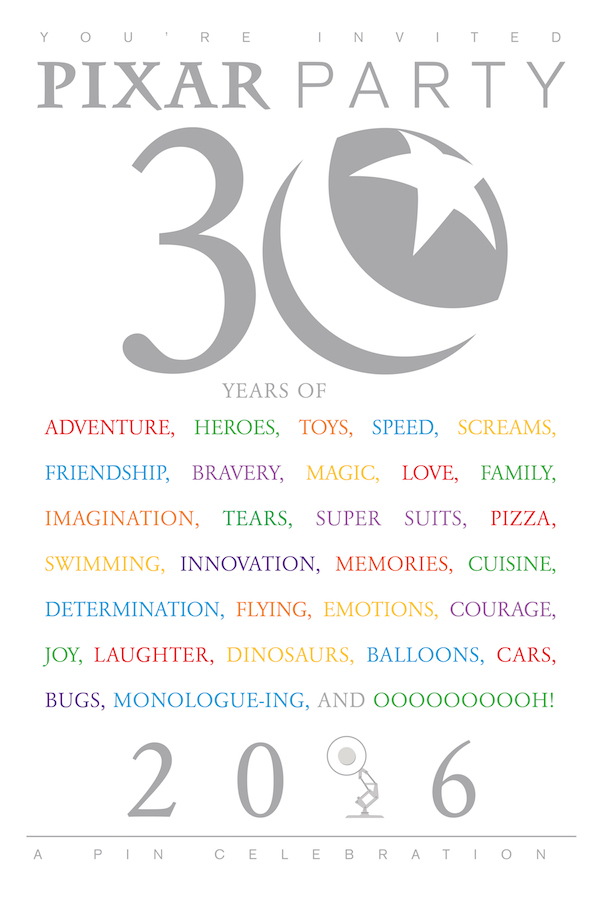 This “totally wicked” event is slated to take place August 26 (from 10 a.m. – 6:30 p.m.) and August 27, 2016 (from 9:30 a.m. – 6 p.m.) at World ShowPlace in Epcot at Walt Disney World Resort. Join us as we celebrate 30 colorful years of Pixar Animation Studios! This award-winning studio has produced a myriad of full length feature films, shorts, (Car) Toons, and television specials full of colorful characters that we love and cherish. The pins for the Pixar Party will feature characters from “Cars” to “Brave” to “infinity and beyond.” The event team shared as many details as they could with me, so here’s the scoop!

Admission to Pixar Party is $140 per guest and includes the following:

Other event offerings include:

Here’s a look at the Pixar Party event merchandise catalog. Some of these designs are absolutely “incredible!”

Hungry for more? There’s even a “Little Chef” Breakfast you can sign up for, which includes a breakfast buffet, trading time inside the Pixar Party venue (from 8:30 a.m. – 10 a.m.) and a limited-edition commemorative gift pin – available only to breakfast attendees. Keep in mind this package sells out fast.

Sign up for the Pixar Party beginning Thursday, April 28, 2016. Ticket Sales begin at 2:00 p.m. Eastern Standard Time on DisneyParksMerchandise.com. Reminder: Event admission does not include theme park admission to Epcot but theme park admission is required to attend the event. Package limited to availability. No discounts will be offered in conjunction with this package.

So “just keep swimming” towards the Pixar Party date and in no time, you will be saying … “mine, mine, mine.”