Disney Channel actress Sofia Carson stopped by Magic Kingdom Park at Walt Disney World Resortto pose with Mickey Mouse and answer a few questions that might be of interest to tweens and their parents. Sofia stars in the 100th Disney Channel Original Movie, “Adventures in Babysitting,” debuting June 24, 2016. 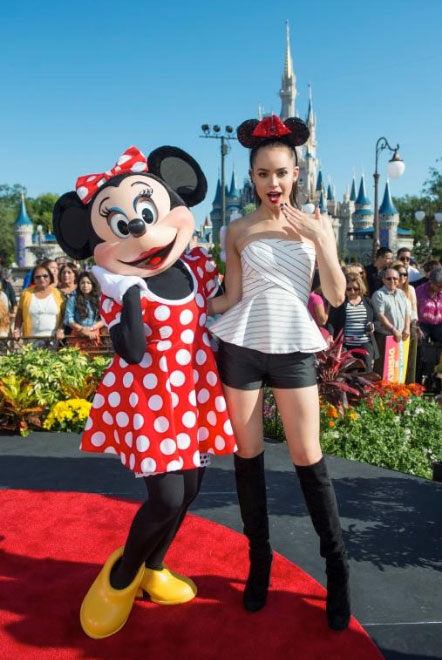 Q: Given your role in the new upcoming film, “Adventures in Babysitting,” if you were asked to babysit a Disney character, which one would you most want to babysit?
A: I would love to babysit Tinker Bell. I’ve always loved Tinker Bell and would like to get to know her better.

Q: Disney has the new “Dream Big, Princess” campaign going on this year to inspire girls and kids around the world to realize their full potential and dream big. Which princess do you feel like you are most like?
A: Since I was a little girl, I’ve always loved Princess Belle. I’ve loved the music in “Beauty and the Beast” and related to Belle’s story. Belle was kind of a nerd with her nose in a book. I’ve always been like that. I love to read and always have MY nose in a book. Belle was also the first princess to have brown hair and brown eyes and I thought I looked just like her! I dressed up like Belle every single Halloween!

Q: What is your favorite theme park snack at Walt Disney World Resort?
A: Popcorn and the Mickey Mouse ice cream bars!

Q: Where is your favorite location at Walt Disney World Resort to be photographed?
A: Right in front of Cinderella Castle at Magic Kingdom, of course!

Q: Which attraction at Walt Disney World Resort would appeal most to your character, Evie, in the Disney Channel movie “Descendants”?
A: Evie’s favorite attraction would probably be the Seven Dwarfs Mine Train at Magic Kingdom because she gets to see the Evil Queen at the end of the ride when she’s really, really old and very ugly. She’s never seen her mother that way! She also gets to see Snow White in all her beauty. The sparkling jewels in the Seven Dwarfs Mine Train attraction would totally appeal to her fashion sense.

Q: If you could live at any of the Walt Disney World Resort theme parks, which park would it be?
A: I would probably live in Magic Kingdom and try to sleep in the castle!

Tune in to Disney Channel on June 24th to see Sofia star in the new movie Adventures in Babysitting. And for more information on planning a trip to Walt Disney World Resort with your tween, check out www.disneyworld.com/Tweens.