I’m delighted to introduce you to four beautiful new animals, one male and three female lion-tailed macaque monkeys that you can see on the Maharajah Jungle Trek in Asia.

Lion-tailed macaques are known for their lion-like manes and tails. They have black silky fur and long gray hairs around their face, with a small tuft of fur at the end of their tail. In addition to using 17 different vocal patterns, macaques also communicate with body language, such as yawning with a grimace to indicate dominance or a threat, and smacking their lips to greet one another. Although they enjoy spending a lot of their time in trees, lion-tailed macaques also come down to the ground to play and forage for food. 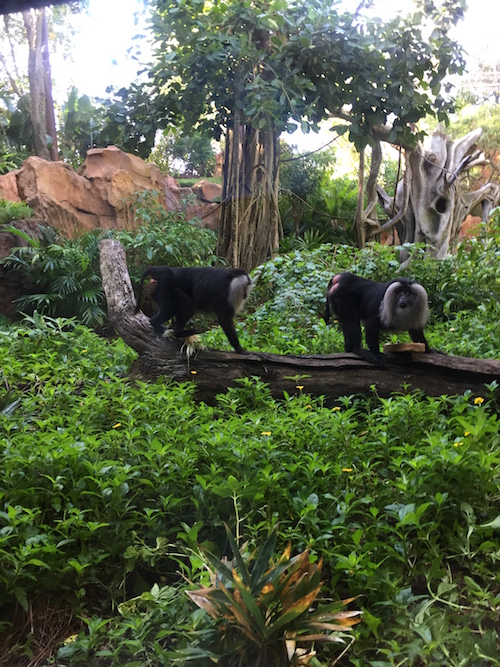 Also known as “wanderoo,” lion-tailed macaques are part of an important conservation story, as they rank among the rarest and most threatened primates in the world. They are native to the Western Ghats of South India’s mature evergreen forests, and some reports show that there may be fewer than 2,000 of these monkeys left in the wild. Overpopulation, habitat destruction, fragmentation and other human activities have forced these primates to live in small, isolated pockets of forest (separated by cultivation and open areas). Lion-tailed macaques are sometimes hunted for their meat and, occasionally, as a source of medicine.

The Disney Conservation Fund has supported the Wildlife Conservation Society’s (WCS) efforts to protect lion-tailed macaques in the rainforests of southwestern India. The WCS team is using indigenous knowledge to map the distribution of macaque populations, researching threats to the species, and hosting rural education programs on macaque ecology and conservation.

The next time you visit Disney’s Animal Kingdom, please join us on Maharajah Jungle Trek to learn more about these fascinating animals and discover the many ways we can work together in North America to support long-term conservation efforts for this important species.

Learn more about some of the other animals you can visit at Walt Disney World Resort at DisneyAnimals.com.