Last week marks five years of proudly sharing Hawaii’s stories and culture through the rich details at Aulani, a Disney Resort & Spa. Aulani welcomed its first guests on August 29, 2011, and since that time, our cast members have enjoyed sharing their own stories of living in Hawaii with all of our guests from around the world. 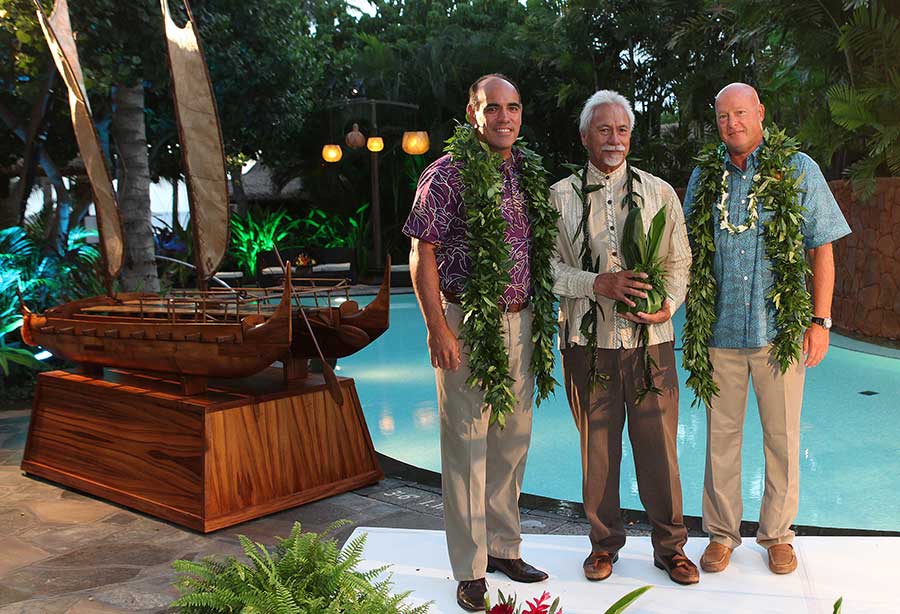 Bob announced a $25,000 contribution on behalf of Aulani to The Friends of Hōkūle‘a and Hawai‘iloa, a nonprofit organization dedicated to the perpetuation of canoe building and preservation of this unique Hawaiian tradition.

“Aulani celebrates Hawaii’s beauty and heritage while also sharing the aloha spirit by giving back to the community,“ said Bob. “In honor of Aulani Resort’s fifth anniversary, we’re proud to support The Friends of Hōkūle‘a and Hawai‘iloa’s efforts to give children and families the opportunity to learn about this important part of Hawaiian culture.”

As we celebrate Aulani’s journey over the past five years, we welcome another wonderful addition to continue telling Hawaii’s story. Today, a one-sixth scale model of the Hōkūle‘a, the Polynesian voyaging canoe made it’s debut in Nā Haku Pavilion just off of the Maka‘ala Lobby. It’s an impressive sight – the mast and rigging stand eight feet tall!

The Hōkūle‘a model serves as a wonderful visual reminder of Aulani’s ties to the full-scale version of the iconic vessel. During Aulani’s design phase, Disney Imagineers sailed aboard the Hōkūle‘a and talked with master navigators, gaining inspiration from the canoe’s design. Guests may notice many design elements incorporated throughout the resort. One of my favorites is a paddle embedded in the tower façade.

Aulani means “messenger of a chief” and the cast members at Aulani have a kuleana, a responsibility, to continually share the traditions of Hawaii with you, our guests, and the local community. We hope you will visit soon, so we can share the stories of Hawaii with you!

So Happy Anniversary Aulani, or as we say in Hawaii… Hau‘oli la Ho‘omana‘o!