When I first saw the trailer for Disney’s The Jungle Book I was bummed that I couldn’t take our 5year old to see it.  Way too scary I thought! As the reviews trickled out, it looked to be a hit. I dug a little deeper and began to think well, maybe, just maybe she can!  I showed her a couple of trailers and asked what she thought.  Of course she loved them but I had to ask the question, does it look scary?  After watching them a couple of times, she had convinced herself that we had to go see it! Off we went!

Now don’t get me wrong, I jumped in my seat (more than once) but with so many animals, and animal fights, I knew what I was in for.  The story stuck close enough to the original, and even with the intensity of the animal scenes (there was no blood or death) it was balanced well by Baloo (voiced masterfully by Bill Murray) and King Louie (voiced by Christopher Walken). Between the two of them they stole the show!  Of course with Disney someone always has to die, so there is a flashback to Mowgli’s dad’s death.  Again nothing graphic.

One question I always ask myself (and others), is this a must see in the theater?  The answer is yes. Why, because of the animals. The way Kaa’s voice moves around you in the theater and draws you in. The subtle growls of Shere Kahn that you felt in your chest, every movement the characters made and how the fur flowed perfectly, was meant for a screen that large.

Your youngster may be different than mine, but our theater was full of kids some looked even younger than ours and no one left their seat!

Summary The biggest takeaway for me was the CGI. It was breathtaking. The detail of every small movement was carefully crafted. Multiple times in the film I found my self lost in the story, forgetting these were not real animals. It was the first time I saw my 5 year old chuckle in a movie that wasn't animated. (I couldn't believe it.) 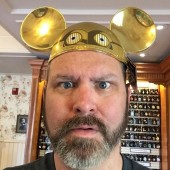 Husband, daddy, Disney fanatic, Instagram junkie. To save for Disney, I do freelance video work, and work at a Fortune 100 fruit stand...