Are you heading to Hawaii and looking for some fresh resort wear? Well, I’m excited to share that two new resort wear lines from Hawaii-based Tori Richard are now available exclusively at Aulani, a Disney Resort & Spa!

The first line, “Disney Village,” is a collection of cyan blue aloha shirts for men and boys, and dresses for women and girls. There is more than meets the eye with the print’s vibrant designs, which creatively illustrate Hawaii’s heritage–including artwork of sailing canoes, the legendary Menehune, the taro plant and even a few hidden Mickeys. Also depicted is the generous bounty from both the ‘āina (land) and moana (ocean), which represent the importance of harvesting from the fertile soil of the islands and the surrounding waters. The line is a stylish appreciation of Hawaii that is distinctly Aulani. 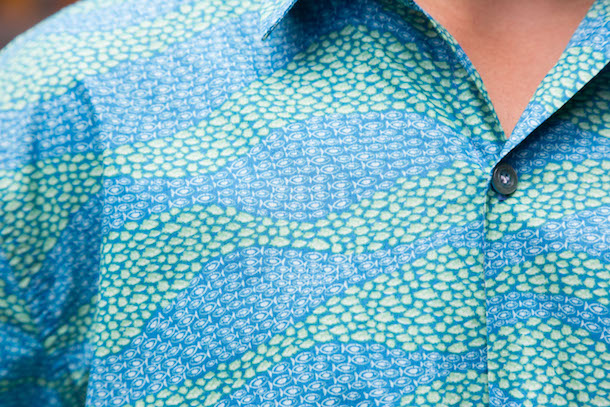 The second line, “Disney Synchro,” includes two aloha shirts for men available in aqua and green. The shirts’ print subtly feature the Hawaii State fish, Humuhumunukunukuāpua‘a (try saying that three times in a row!). If you look closely, an “Aulani fish” appears in the design with the joining of the resort’s iconic arches. The shirts “move” as the fish swim through the dynamic, oceanic current.

Find all of these new items at Hale Manu at Aulani, a Disney Resort & Spa!